Car shakes when accelerating? Here’s what you should know 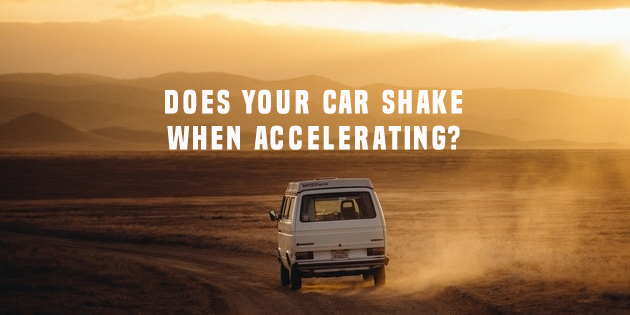 Shake, rattle, and roll. These words work well as the lyrics of a song but when they are applied to cars, they refer to annoying vibrations, and form the basis of the most commonly occurring problems faced by car owners today.

Nonetheless, car manufacturers go to great lengths to ensure that all vibrations are damped out, but things sometimes go wrong, resulting in vibrations that may or may not be easy to diagnose and correct. Part of the problem has to do with the fact that some vibrations are specific to certain makes and models, and even then, the same root cause may affect two identical cars in different ways, since no two cars “wear” in quite the same way.

Some causes of vibration may make one car almost undriveable, while the same problem may have a smaller or almost no affect on a different make of car. Nonetheless, a few problems produce vibrations on all cars, even though the severity of the vibration might not always be the same in all cases.

Much of this has to do with design differences between cars, and in this article, we will take a closer look at some of the common problems that cause vibrations in cars that are under acceleration, as opposed to vibrations that are present all the time, regardless of speed, road surface, or how the vehicle is loaded.

Video: Fixing a car that shakes when accelerating

The video above, by Scotty Kilmer, is a great place to start if your automobile is facing this frustrating problem. If that doesn’t fix it, read our other tips. The word “toe”, refers to the longitudinal relationship between the wheels on an axle, and this relationship only applies in the direction of travel. “Toe-out” refers to the wheels pointing away from each other, and “toe- in” means the wheels are pointing towards each other. This is a critical setting on all cars, but in the case of FWD cars, the front wheels are almost always set to point slightly away from each other. So what does this have to do with vibrations?

Simply this; under acceleration, the forces at work in a FWD vehicle pull the wheels together- but only up to a point. As the vehicle accelerates, the torque-derived forces acting on the wheels diminish progressively, and at a certain point, the rolling resistance of the tires cancels out the acceleration forces.

At this point, the wheels run at the specified toe-in/toe-out value, and there should not be any vibration, pulling, or other issues. However, worn suspension components can cause the wheels to excessively deflect inward under acceleration, and since the rolling resistance of the tires causes an opposite movement, the opposing forces can cause the wheels to start flapping around- almost like a flag in a stiff breeze.

Wheels that are flapping around in this manner can set up severe vibrations, and depending on the amount of wear or damage in suspension components, it could cause a driver to lose control of a vehicle, even at relatively low speeds.

FWD vehicles rarely suffer from vibrations caused by damaged or unbalanced drive shafts, since they only rotate at the same speed as the wheels, which in most, if not all cases, is not fast enough to set up a noticeable vibration. Besides, even with visibly bent drive shafts, most of the deviation from running true is absorbed by the CV joints. However, the same cannot be said for RWD vehicles that use long, rapidly rotating drive shafts.

To provide for suspension movements, these drive shafts are fitted with Universal joints that allow for independent movement of both the transmission and the differential. While Universal joints are excellent at transferring power, they require regular maintenance and effective lubrication to prevent mechanical wear that leads to excessive amounts of free play.

Depending on the degree of wear and free play in one or more Universal joints, the vibration may be felt only under acceleration, but in many cases, the vibration will be felt for as long as the drive shaft is rotating.

Many drive shafts on RWD vehicles consist of two or more pieces that are connected with either Universal-, or CV joints. In these designs, the whole of the drive shaft is supported by a support bearing that is attached to the vehicle frame.

Since the driveshaft is hinged in the middle, it will tend to rotate around this hinge point, hence the need to support the drive shaft close to the hinge point, but in a manner that does not transfer vibrations into the vehicle. To do this effectively, all drive shaft support bearings are encased in a flexible rubber “mounting” to allow for some deflection of the drive shaft, while at the same time providing firm support.

Over time though, the constant vibration of both the vehicle and the drive shaft reduces the stiffness of the rubber mounting in which the bearing proper is encased, with the result that instead of preventing excessive deflection of the drive shaft, the support bearing becomes unable to support the drive shaft.

Thus, under high torque values during acceleration, the drive shaft starts to “bounce”, or rotate around the hinge point, since the rubber mounting can no longer hold drive shaft in place. In some cases, and depending on the length of the drive shaft and the position of the support bearing, the vibration can diminish and even go away altogether as the torque input diminishes.

However, even if the vibration goes away at some point while a vehicle accelerates, it almost always returns on deceleration, since the drive shaft is then driven by the differential. RWD vehicles are more likely than FWD vehicles to suffer from vibrations under acceleration, simply by virtue of the design of their drive trains. FWD vehicles are of course not immune, but because of the way they are designed, a broken or defective engine or transmission mount is unlikely to cause a sustained vibration. Nonetheless, on RWD vehicles, high torque values can have a pronounced effect if the mounts holding the engine and transmission down are not in a perfect condition.

When a RWD vehicle is under hard acceleration, the engine tries to rotate around its own centre of mass, which is prevented by the mounts that hold it down. Thus, since engines rotate in an anti-clock-wise direction when viewed from inside the vehicle, the engine will attempt to rotate in the opposite direction when power is applied.

So if the left-hand mount is broken or damaged, the engine can start bouncing around since there is nothing to prevent it from rotating around its centre of mass. In some cases, the transmission mounts may prevent this rotation to some degree, but this is not what they were designed to do.

Transmission mounts are simply not sturdy enough to hold a powerful engine down, which often leads to a severe vibration as the remaining mounts are first stretched, and then compressed as the stretching movement causes the mounts to contract.

However, broken or damaged engine mounts do not always cause a vibration; more often than not, all that happens is that the engine comes to a stop during its rotation with a resounding “clunk”, and whether or not a vibration occurs depends in large part on the make, model, and design of a particular vehicle.

On vehicles that are fitted with lockup torque converters, severe vibrations while under acceleration can occur as a result of the locking mechanism engaging and disengaging in an erratic manner. In some cases, the vibration may be accompanied by loud mechanical noises, but the absence of noises should not be taken as evidence that there is nothing wrong with the torque converter.

Common causes of lockup mechanisms failing are defective MAP sensors, vehicle speed sensors, or software malfunctions in the engine or transmission control units. If there are no other obvious causes of a vibration under acceleration and the vehicle has a lockup torque converter, the best thing to do is to have a comprehensive diagnostic performed to either confirm, or eliminate defective sensors as the root cause of the issue.

How To Check Fuel Injectors And Replace Them: A Complete Guide

How To Fix a Scratch On a White Car: The Ultimate Guide

How To Fix A Broken Car Window

How To Check Fuel Injectors And Replace Them: A Complete Guide